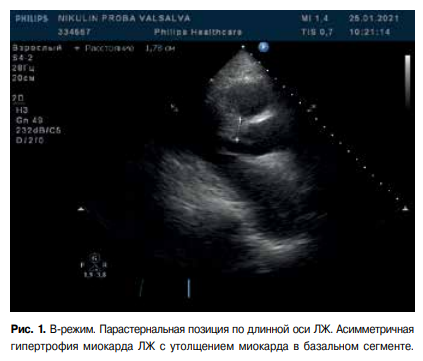 Hypertrophic cardiomyopathy (HCM) is a genetic myocardial disease characterized by left (LV) or right ventricular hypertrophy and/or the, more often asymmetric due to interventricular septum (IVS) thickening, which cannot be explained exclusively by an increase in pressure, and occurring without another cardiac or systemic disease, associated with LVH [1]. Despite much data on this form of cardiomyopathy, it continues to bring a lot of surprises. We present a case report on classic HCM phenotype with clinical symptoms due to latent LV outflow tract (LVOT) obstruction in a 66-year-old male patient 5 years after orthotopic heart transplantation (OHT).

On April 19, 2015, 61-year-old male patient underwent OHT due to the end-stage ischemic cardiomyopathy. At the time of OHT, the patient suffered from grade 1 hypertension with good blood pressure control. The donor was a 43-year-old woman. Echocardiography did not reveal pathology of the donor heart. Post-transplant immunosuppression consisted of tacrolimus 3,0 mg a day with maintenance of a target blood level of 5-10 ng/ml, mycophenolate mofetil 2000 mg a day, and methylprednisone 4 mg a day.

The patient was monitored in accordance with the clinical guidelines for managing patients undergoing heart transplantation [2]. Transthoracic echocardiography was performed using Acuson Simens SC 2000 and PHILIPS IE 33 systems according to the standard protocol.

The electrocardiography did not reveal abnormalities after OHT, while on January 2021, transient first-degree atrioventricular block (PQ, 200-240 ms) was recorded.

Echocardiographic parameters in the period of 2015-2021 are presented in Tables 1 and 2. Analysis of echocardiography dynamics during this period showed a gradual development of moderate LVH, mainly in the basal IVS part up to 17 mm, LV decrease, preserved LV contractility (LV ejection fraction, 60-64%), left atrial enlargement. Since June 2015, the systolic anterior mitral valve leaflet motion has been determined, and since May 2016, the anterior leaflet mitral-septal contact has been determined. LVOT obstruction at rest was recorded once in 2016 (the maximum pressure gradient, 47 mm Hg), but further studies at rest did not determine obstruction until 2021. The development of pseudonormal diastolic dysfunction was observed, which was accompanied by an increase in peak lateral early diastolic mitral annular velocity (Em), the ratio of the peak early diastolic velocity to the peak lateral early diastolic mitral annular velocity (E/Em). The right heart during follow-up did not have noticeable changes: right atrial dimensions remained at the upper normal limit (four-chamber view, 36-41 x 51-52 mm in 2015, 40 x 51 mm in 2021); right ventricular dimensions in 2015 and 2021 were 26 mm; mild tricuspid valve regurgitation was recorded in 2015 and 2021; pulmonary valve without severe hypertension in 2015 and 2021; pulmonary artery systolic pressure was 28 and 26 mm Hg in 2015 and 2021, respectively.

Echocardiographic parameters of the patient in the period of 2015-2021

Echocardiography in January 2021 revealed moderate asymmetric LVH due to IVS thickening, mainly in the basal part up to 1,7 cm (Figure 1), left atrium dilatation, mitral anterior leaflet-to-chordae contact, LVOT obstruction, pseudonormal diastolic dysfunction, mitral regurgitation (Table 3). The ratio of IVS/LV posterior wall was 17/11=1,5 (>1,3). LVOT obstruction was latent. A significant pressure gradient in the LVOT at rest was recorded once and amounted to 177 mm Hg. In repeated echocardiography, the pressure gradient in the LVOT at rest was within the normal range (maximum, 20-23 mm Hg), increasing after premature ventricular contractions to 75-125 mm Hg (Figure 2), and after the Valsalva maneuver up to 30-40 mm Hg (Figure 3).

Transthoracic echocardiographic parameters in the patient in January 2021

Figure 2. В-mode + CW-mode. Apical 5-chamber view. The study of LVOT flow in continuous-wave (CW) Doppler mode: at rest — no obstruction; during extrasystole — an increase in pressure gradient to 125 mm Hg.

According to coronary angiography, including in January 2021, no hemodynamically significant coronary flow obstructions were detected. Endomyocardial biopsies were performed according to the established protocol. The patient had one episode of grade 2R acute cellular rejection in May 2015, which was treated with intravenous pulse steroid therapy. There were no histological and immunohistochemical signs of rejection. The last endomyocardial biopsy was performed in July 2016. The results of endomyocardial biopsies were reviewed in January 2021. However, HCM signs were not detected in the tissue samples of right ventricular apex.

Thus, within 5 years after heart transplantation, the patient developed asymmetric LVH, mainly due to the IVS basal part, accompanied by LVOT obstruction and reversible mitral insufficiency during exercise and provocative tests. The patient was diagnosed with asymmetric HCM of the donor heart with latent LVOT obstruction.

HCM is considered the most common inherited heart disease (Figure 4) [5][6]. It is characterized by predominantly LV hypertrophy without chamber dilatation and signs of other cardiac pathology or systemic diseases responsible for hypertrophy development. Grade 1 hypertension in our patient was well controlled by antihypertensive therapy and could not explain LVH. Also, our patient did not have prior diseases that could cause LVH as part of the syndrome.

Figure 4. Prevalence of HCM in the general adult population.

Tacrolimus is known to be a cause of LVH in children and adults. In children, symmetrical LVH developed within 2-3 months to four years after the tacrolimus therapy initiation for liver and/or intestinal, kidney transplantation [7-11]. HCM in adult recipients receiving tacrolimus has been the focus of individual case reports and specially designed studies [12-15]. In both children and adults, tacrolimus-induced HCM was represented by symmetrical LVH, usually without LVOT obstruction, and reversible after tacrolimus withdrawal. Our patient had a morphologically different type of donor heart hypertrophy.

During follow-up, our patient developed the classic HCM phenotype of donor heart with symptoms associated with latent LVOT obstruction. Electrocardiography did not reveal abnormalities after OHT for a long time, which is observed in 5-25% of patients with HCM. Asymmetric LVH with slight wall thickening and more pronounced hypertrophy of single segments, as in our case, occurs in 1/3 of patients with HCM [16]. The latent LVOT obstruction at rest in symptomatic patients with HCM has been demonstrated not only for several days between echocardiography procedures, but also for several minutes during cardiac catheterization [17-19]. According to the study by Geske JB, et al. (2011), the spontaneous variability of LVOT was 49,0±53,1 mm Hg in the range from 0 to 210,8 mm Hg, and the LVOT variability after premature ventricular contractions significantly correlated with the LVOT variability at rest [19].

At the time of OHT, donor heart echocardiography did not reveal structural pathology, which can be explained by phenotypic features in HCM. Currently, more than a thousand mutations have been identified in about 30 genes responsible for HCM development [20]. Most types of HCM characterized by autosomal dominant inheritance, but mitochondrial and autosomal recessive patterns have also been described [21-23]. A consequence of wide genetic heterogeneity is the clinical heterogeneity of HCM with a broad range of manifestations from the carriage of mutant genes (genotype positivephenotype negative individuals), asymptomatic LVH to clinical syndromes of heart failure, arrhythmias, and sudden death. For example, the prospective study by Maron BJ, et al. (2001) demonstrated a variety of phenotypic manifestations of HCM in individuals with a mutation in myosin Binding Protein-C (MyBP-C), as well as the possibility of disease manifestation in middle age [24]. Incomplete penetrance of the disease without LVH in adulthood is most characteristic of mutations in MyBP-C gene, myosin heavy chain gene (MYN7), and the troponin T gene [24-26]. A case has already been reported in the literature when, despite adequate donor screening, a 66-year-old woman developed idiopathic HCM with midventricular obstruction 19 years after heart transplantation [27]. At the same time, despite the typical clinical and morphological performance of obstructive HCM in our case, the influence of tacrolimus cannot be completely ruled out. A switch to everolimus is planned.

This case report demonstrates the gradual development of asymmetric HCM of a donor heart with latent LVOT obstruction during 5 years after transplantation.

Given the high prevalence of mutant genes responsible for HCM in the general population, incomplete penetrance, and the presence of a pre-hypertrophic stage of HCM, medical specialists should be prepared to face this pathology in heart transplant recipients.

Relationships and Activities: none.