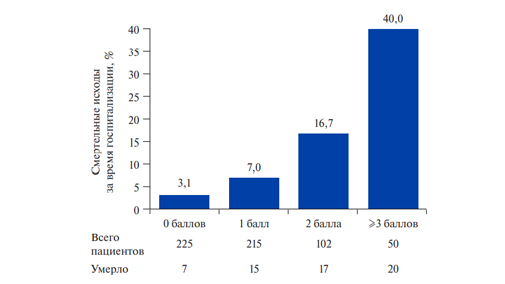 Modern treatment of pulmonary embolism (PE) according to the European Society of Cardiology guidelines [1] involves risk stratification. The currently used risk stratification is based on clinical manifestations of the disease, echocardiographic data, assessment of myocardial necrosis markers, and also on the assessing combined risk using the pulmonary embolism severity index (PESI) or its simplified version (sPESI) [2]. At the same time, the practical use of the PESI or sPESI scores shows that some important factors, undoubtedly associated with the prognosis, remain outside this index, which can reduce the accuracy of risk stratification.

The aim was to create a new prognostic scale for in-hospital mortality risk assessment in patients with PE.

The study was based on the Russian register of acute pulmonary embolism SIRENA. The peculiarities of register organization, inclusion and exclusion criteria, as well as the main results are described in detail in previous publications [3]. Inclusion in the register was carried out sequentially for 12 months from April 2018 to April 2019 in 20 hospitals in 15 cities of Russia. The creation of a predictive scale was not the primary aim of the register and the analysis was performed retrospectively.

Statistical analysis. Independent predictors of in-hospital mortality became components of the novel prognostic score. The identification of these factors was carried out by univariate and multivariate regression analysis. Since the register protocol did not provide assessing the full PESI score, the predictive value of the new score was compared with the sPESI score. Comparison of prognostic scores was carried out by assessing the areas under the ROC curves.

Shortness of breath was the most common manifestation of PE. Five hundred forty (90,4%) patients complained about it. One hundred seventy- eight patients (29,8%) had chest pain as the main symptom, and 179 (30,0%) had syncope.

Figure 1. Areas under the ROC curves for the simplified and complex versions of the SIRENA score.
Abbreviation: CI — confidence interval.

Figure 2. Relationship between different values of the SIRENA score and in-hospital mortality rate.

According to the ROC-curve, a cut-off point was found for dividing the SIRENA score into the low risk (0-1 points) and high risk ( ≥2 points) categories for death during hospitalization. An almost five-fold significant difference in in-hospital mortality rate between high and low risk values on the SIRENA score was shown (RR, 4,87; 95% CI, 2,97-7,98; P<0,001 (Figure 3).

Figure 4. Areas under the ROC curves for in-hospital mortality for the SIRENA and sPESI scores.
Abbreviation: CI — confidence interval.

In the presented study, an attempt was made to create a new prognostic score to determine the risk of in-hospital mortality rate due to PE. The problem of predicting short-term outcomes in pulmonary embolism is quite relevant, since understanding the degree of risk is not only empirical knowledge, but also an important link in determining the management of patients.

Currently, the generally accepted prognostic model is the PESI and sPESI scores, which are the most accurate in comparison with other prognostic scores [2, 4-6]. At the same time, it is quite obvious that the sPESI score is not ideal and universal, since all possible factors of an unfavorable prognosis cannot be included in it (as in any other score). Therefore, the search for new opportunities to improve prognosis in patients with PE is of great clinical importance.

The novel prognostic score was created in the traditional way, by identifying independent predictors of deaths during hospitalization. It is interesting to note that most of the identified factors, on the one hand, can quite traditionally be associated with a poor prognosis in patients with cardiovascular diseases (reduced left ventricular ejection fraction, syncope, cyanosis, renal dysfunction). On the other hand, it should be noted that they do not directly coincide with risk factors in sPESI score (age, history of cancer or cardiopulmonary disease, low blood pressure, low blood oxygen level, tachycardia). The coincidences between some components of the

SIRENA and sPESI scores are only indirect (reduced blood oxygen level and cyanosis; cardiopulmonary disease and low left ventricular ejection fraction). This is probably why, in the studied group, the coincidence of death risk indicators between the scores was found only in 55% of patients, and the combination of high risk on both scores was associated with a significantly higher risk of death compared to patients who had a high risk on only one score.

In general, the combination of independent risk factors made up the SIRENA score even without using the numerical odds ratio values. Each of the score components has the same quantity, which is undoubtedly convenient for practical use. A specially conducted comparative analysis showed no advantages of a more complex score version.

Study limitations. The creation of a predictive score was not the primary aim of the SIRENA register.

The assumption of a high predictive value of the novel score and its comparison with the sPESI should be validated with independent samples, preferably with a large number of patients.

For further use of the SIRENA score, it is necessary to understand its predictive value for more distant outcomes (not just in-hospital outcomes), and in addition, determine the place of the score in decision-making on patient treatment.

Based on the Russian register of acute pulmonary embolism, the SIRENA score was developed, which has a high accuracy (sensitivity, 62,7%; specificity, 78,5%) in predicting in-hospital mortality.

The novel SIRENA score includes the following components: 1) left ventricular ejection fraction <40%; 2) immobilization in the previous 12 months; 3) creatinine clearance <50 ml/min; 4) syncope as a PE symptom; 5) cyanosis upon admission. The new SIRENA score is not inferior in predictive accuracy to the sPESI score recommended by the European Society of Cardiology guidelines, and the addition of the SIRENA score to the sPESI increases the predictive accuracy.