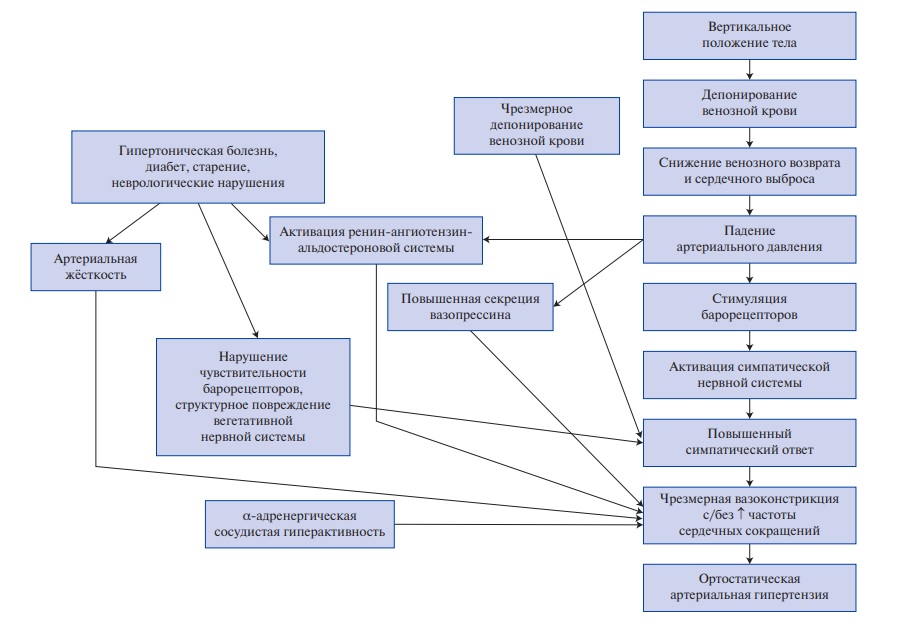 Hypertension (HTN) is the most important modifiable risk factor (RF) for cardiovascular diseases and remains one of the most significant medical and social problems in the world [1-3]. Annual mortality and disability, associated with increased blood pressure (BP), confirm a direct relationship between BP and cardiovascular risk (CVR) [1][4]. In addition, the incidence of HTN among young people increases, but this group often escapes the attention of physicians, which leads to a long absence of therapy, asymptomatic target organ damage and an increased risk of cardiovascular events (haemorrhagic and ischemic stroke, myocardial infarction, sudden death, heart failure and peripheral arterial disease), as well as end-stage renal failure [1][3].

Orthostatic test (OT) is an easy-to-perform and available method for assessing the cardiovascular system and its autonomic regulation, performed on an outpatient basis by an any physician and does not require additional equipment [3].

The change by the patient of body position from horizontal to the vertical one causes multidirectional changes in the hydrostatic pressure of cardiovascular system relative to some hydrostatic indifference point located several centimetres below the diaphragm level. The action of gravity shifts the intravascular volume from the chest (~400-1000 ml) into the splanchnic circulation and limb veins, complicating venous return and reducing the volume of circulating blood: most of the changes occur ~ in the first 10 seconds of orthostasis. The change in blood flow leads to a decrease in right ventricular filling and a decrease in cardiac output (CO), as a result of which there is a transient BP decrease and heart rate increase, which stimulates the baroreceptor areas and the central part of the autonomic nervous system (ANS), resulting in a decrease in vagal tone and increase in sympathetic tone. This reflex causes compensatory vasoconstriction of resistance and capacitance vessels in the visceral, musculocutaneous and renal vascular systems, an increase in peripheral vascular resistance and stroke volume, providing venous return, BP maintenance and organ perfusion [5-7]. Systemic vasoconstriction is a key factor in maintaining upright BP, more than an increase in heart rate. In a healthy person, orthostatic stabilization is achieved within 60 seconds and less.

The inability of regulatory mechanisms to adequately compensate for stress causes orthostatic intolerance, a type of which is orthostatic hypertension (OH). Since the regulatory mechanisms of the orthostatic response make a significant contribution to maintaining the blood pressure level, and their violation plays an active role in HTN development, this allows us to consider the presence of OH as a marker of CVR stratification [3].

Definition and diagnostic criteria for OH

The term ‘OH’, described as elevated blood pressure in an upright position and used by the medical community since 1940, is a condition rarely assessed by physical examination or regarded as an unexpected and illogical outcome of OT [5, 6].

The diagnostic criteria for OH are not defined [5][6], and the number of related studies is rather low: the term ‘OH’ is not included and is not defined by the current guidelines for HTN [1][8]. The proposed diagnostic criteria for OH were structured in the paper by Jordan J, et al. (2020) in a table (Table 1) [5]. Table 1 [5] includes studies [9-24], which are the first in the literature to suggest or apply specific definitions of OH, but none of them were based on normative data or CVR assessment. Most of them [10-16][20-24] used the absolute difference in systolic BP (SBP) and/or diastolic (DBP) in the horizontal position and orthostasis as a diagnostic criterion. The other studies [9][17][22][24] defined OH as the transition of normal BP in a horizontal position to increased BP in orthostasis, which depended on HTN definition [5].

The use of increased DBP in orthostasis as a diagnostic criterion is less reliable, since in an upright position due to peripheral vasoconstriction and decreased stroke volume, an increase in DBP by 5-10 mm Hg is physiological [5][25]. Jordan J, et al. (2020) [5] consider an important and rarely discussed aspect of a patient’s BP change during OT: when should BP rise in orthostasis and how long should it remain elevated to confirm OH. In 2019, Finucane C, et al. proposed 2 diagnostic criteria for OH: a stable increase (>1 min) in SBP ≥20 mm Hg or >140 and 90 mm Hg, if the patient has normal BP in the horizontal position [5][24].

The pathogenetic mechanisms of OH are not fully understood [5][6][25]. The conventional explanation is the initial increased sympathetic activity and excessive sympathetic response caused by a decrease in CO as a result of orthostasis [6][9][13][20][25][26]. In addition, the pathogenetic mechanism of OH (Figure 1, first published in the paper by Magkas N, et al., 2019) may be caused by ANS dysfunction (impaired sensitivity of baroreceptors and/or baroreflex inability to adapt to “normal” BP), α-adrenergic vascular hyperactivity, increased norepinephrine concentration, renin-angiotensinaldosterone system (RAAS) activation and increased secretion of vasopressin [6][13][20][25][27-29]. Factors associated with OH development include arterial stiffness and remodelling of small arteries, excessive venous pooling [5][6][9][20][30][31].

Hypertension, along with aging, diabetes and neurological disorders, conditions associated with ANS degeneration and sympathetic activation, is considered as a precipitating factor of OH [12][18][20][32]. Structural and/or functional disorders of the renal vascular system, as in HTN, can also determine the pathogenetic mechanisms of OH. A decrease in renal blood flow activates the RAAS, further causing vasoconstriction, water and salt retention, and BP increase (renovascular hypertension, nephroptosis) [5][6][30][33][34]. Thus, it is obvious that OH and HTN have common pathogenetic mechanisms, but it remains unclear whether OH is a cause, effect or phenotype of HTN [6]?

The absence of generally accepted diagnostic criteria for OH complicates the comparison of research results: in studies defining OH as an increase in SBP ≥20 mm Hg, the prevalence of OH varied from 1,1% in young patient population to 28% in elderly one [6, 25, 37, 38]. In studies using lower SBP elevation levels as diagnostic criteria, the prevalence of OH was expected to be higher.

OH is interconnected with all components of the cardiovascular continuum in HTN: RFs, Asymptomatic HTN-mediated organ damage, and associated conditions (Table 3).

OAS is interrelated not only with HTN, but also with BP changes during the day: the level of morning BP increase, BP variability and an excessive nocturnal BP decrease (Extrime-dipper profile), which are known markers of stroke [3][13][15][20]. Patients with extreme-dipper HTN have a higher prevalence of silent stroke diagnosed by magnetic resonance imaging compared with patients with dipper hypertension. In addition, patients with extremedipper hypertension have a greater risk of manifested stroke, and in case of the latter, have a worse prognosis. OH can be RF in hypertensive patients, because two-thirds of strokes in such extreme-dipper patients occur in the morning, when patients have a morning BP rise [15]. In 1997, Matsubayashi K, et al. [11] found a relationship of OH with stroke and neurocognitive deficits, independent of OH presence. The relationship between OH and the incidence of lacunar strokes was later confirmed by the ARIC study [42] and Nibouche-Hattab WN, et al. (2017) [32], while papers by Kario K, et al. (2002) [13], Eguchi K, et al. (2004) [40], Fan XH, et al. (2010) [41] revealed an increased risk of stroke in a cohort of patients with HTN and OH.

Cross-sectional studies have demonstrated the relationship between OH and HTN-mediated organ damage: an increase in natriuretic peptides and albumin-to-creatinine ratio [19], left ventricular hypertrophy [13][32], the intima-media thickness [12]; as well as associated clinical conditions: peripheral arterial disease [41] and coronary artery disease [14], which allows to consider the diagnosed OH as a factor of CVR stratification in HTN patients.

In 2019, Kostis, et al. [19], based on the Systolic Hypertension in the Elderly Program (SHEP) study, revealed an association of OH with higher cardiovascular and all-cause mortality after adjusting for age, sex, and baseline SBP. However, after adjusting for RFs of cardiovascular and other concomitant diseases, the relationship lost significance. In 2021, Rahman M, et al. published data from a retrospective analysis of the Systolic Blood Pressure Intervention Trial (SPRINT): in the intensive antihypertensive therapy group, OH was associated with a higher risk of cardiovascular outcomes [48].

Thus, although it is obvious that OH and HTN are interrelated conditions, the evidence base is small and there are no studies on the prognosis in patients with HTN and OH, and not in the general population of patients with OH. There are no criteria for the diagnosis of OH, approved by the medical community. Based on the foregoing, large-scale studies are needed to clarify the possibility of using diagnosed OH in hypertensive patients as a marker of CVR.